EU puts ‘Dublin to bed’ and launches New Pact on Migration and Asylum.

EU puts ‘Dublin to bed’ and launches New Pact on Migration and Asylum.

The overcrowded Moria camp has become an image of a failed collective effort to create cross-European solidarity for refugees and asylum seekers. On 23 September 2020 the European Commission launched their New Pact on Migration and Asylum aimed at replacing the heavily criticized Dublin Regulation. But what exactly is the ‘Dublin problem’ – and which solutions do the new pact hold, if any?

On 9 September 2020, destructive fires broke out in the Moria camp on Lesvos, leaving nearly 13000 refugees homeless.

The catastrophe immediately sparked a series of political reactions among national and EU politicians calling for better collective solutions to a reemerging European refugee crisis, causing the EU Commission to push forward the launching of the New Pact on Asylum and Migration.

During the press conference where the Commission put forth its New Pact, the EC vice-president Margaritis Schinas admitted that the Dublin agreement is inadequate to solve the current situation:

Days before the launching of the new pact, PROTECT’s project leader Hakan G. Sicakkan commented on leaked content, expressing concerns about the pact’s ability to offer a fresh start for the European Union:

On 19 September 2020 the Rectorate of the University of Bergen, Norway, invited four migration researchers to address the fires in Moria and its humanitarian and political consequences.

The roundtable was part of the ongoing debating series ‘Innsikt’ (‘Insight’), which aims at creating and contributing to informed debates on current and complex issues.

The roundtable was chaired by Dr. Kjersti G. Berg from the Christian Michelsen Institute.

The full conversation is available on YouTube (in Norwegian only).

The Dublin Regulation, which the New Pact aims to replace, has received criticism from many holds, including members of the European Parliament, for being unfair both to asylum seekers and certain member states.

The agreement, which states that the first EU country an asylum seeker arrives in, is responsible for considering the claim and provide protection if the asylum seeker meets the requirements for international protection.

This places pressure on EU states with high numbers of annual arrivals such as Greece or Italy, while at the same time placing asylum seekers in uncertain limbos while awaiting the result of their claim, explained PROTECT’s project leader Hakan G. Sicakkan in a recent roundtable on Moria (see fact box).

– Reception camps are meant to be temporary – but life in the Moria hotpots camp was long-lasting and was given a permanent condition without the rights of the camp’s residents being safeguarded, she says.

– The uncertainty about how long one will live in such a state of emergency is existential. The camp becomes a place where political repression, new principles of exclusion and confinement, new forms of categorization of people, separation, and custody are practiced, says Nepstad Bendixsen.

Nepstad Bendixsen continues to explain that the fires in Moria can be interpreted as “resistance from humans that have been pushed to their very limits”.

She also points out that the crisis should be understood as a result of several concurring crises; a Greek economic crisis, a pandemic, a humanitarian crisis, a European migration crisis -and not least a reminder of several ongoing global crises, such as the Syrian civil war.

Read the full interview with Bendixsen from the roundtable on Moria

Dublin has worked excellently – and that is the problem

The Moria fires and the humanitarian disaster on Lesvos have been described as the very image of a malfunctioning European asylum system.

During the Commission’s press conference on the 23 September, EC Vice-President Schinas described Moria as a result of “a system that is a ‘non system'”.

Jan Fridthjof Bernt is Professor emeritus at the University of Bergen, Norway, a member of PROTECT’s International Advisory Board, and an expert in public law.

Bernt has been a frequent public speaker on matters of refugee and asylum legislation for many years. Recently, he joined Nepstad Bendixsen and Sicakkan for the University of Bergen roundtable on the situation in Moria (see fact box).

He says the Dublin Regulation is not the problem but rather a symptom of a missing collective will to protect refugees:

– The Dublin Regulation reflects a Europe that is comfortable with a system that is inadequate compared to existing ideals of consistency, humanitarianism, and legal protection, Bernt says.

But what happened in Moria can also be seen as a result of the European asylum system, with the Dublin Regulation as its legal basis, functioning exactly how it was intended, explains PROTECT’s project leader Hakan G. Sicakkan in the video below:

Bernt sees the existing third-country agreements as part of the problem, arguing that they uphold the practicing of the ‘Godfather principle’ among European states:

– Third-country agreements shove the responsibility for suffering migrants away from Europe and can be seen as the ‘Godfather principle’ in practice: the Godfather acknowledges that he has a problem, but delegates the solutions and their means to other actors, says Bernt.

– Countries cannot stand on the sideline expecting their neighbors to perform their duties of protecting refugees if they don’t uphold this moral duty themselves, he says.

Bernt continues to point out that the current system render visible both the moral and legal flaws of global refugee protection:

– States are currently reluctant to fulfill the obligations of the Geneva Convention because that would mean taking in, and offer protection to more refugees, thus coming across as an attractive country for refugees, says Bernt.

In a recent article by the Norwegian news provider, NRK.no, PROTECT’s project leader Hakan G. Sicakkan explains that migration has been a challenging area for the EU to integrate from the very start; countries want to be in control of their own borders, thus decide for themselves who to let in and not.

Following the Moria fires, tensions within EU countries are once again on the rise. This will affect the success and practical implementation of the new pact, says Sicakkan.

But as will different EU countries’ understanding of national identity; these are deep-going historical structures that a new policy cannot undo so easily, says Sicakkan.

– States’ policy outcomes on migration are closely connected to differences in their citizenship models. Eastern European countries like Hungary, Poland, the Czech Republic and Slovakia base their sense of national belonging on ethnicity, which often manifests itself in a stricter asylum policy, explains Sicakkan.

In the video below, Sicakkan elaborates on the historical structures that challenge the lofty goal of a common migration and asylum policy:

More on the Moria fires: 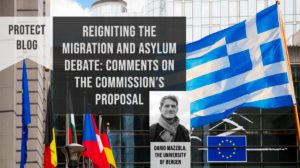 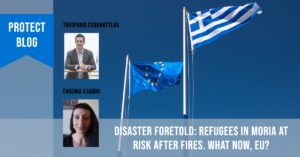