The Federal Court of Canada has determined that the Canada-US Safe Third Country Agreement (STCA) infringes upon asylum seekers’ right to international protection and has given the Parliament six months to take necessary action. Until then, Canada can continue handing over asylum seekers to the US officials, exposing them to arbitrary detention and the possibility of immediate deportation to where they have fled persecution or other life-threatening situations. The Federal Court should rescind the STCA immediately, not six months from now, say PROTECT researchers, Idil Atak, Zainab Abu Alrob and Jona Zyfi in this blog piece.

In a landmark ruling on July 22, the Federal Court of Canada determined that the Canada-US Safe Third Country Agreement (STCA) is unconstitutional, since it infringes upon asylum seekers’ right to liberty and security protected under the Canadian Charter of Rights and Freedoms.

The STCA, in force since 2004, directs asylum seekers to make refugee claims in the first safe country they pass through. Since the US is listed as “safe”, most asylum seekers who attempt to enter Canada at an official border crossing point are found ineligible by Canadian authorities. They are turned away and forced to return to the US without any form of risk assessment.

Ostensibly, this legal tool ensures responsibility-sharing among Canada and the US. It is based on the assumption that both countries are “safe” for asylum seekers since they have robust refugee protection systems and comply with the 1951 Refugee Convention and international human rights standards.

The legal challenge was launched in the midst of a considerable increase in asylum seekers irregularly crossing the Canada-US border soon after the election of Donald J. Trump. The situation has sparked concerns from the Canadian government about the administrative burden and financial costs associated with processing allegedly baseless refugee claims.

In its decision, the Federal Court focused on “the most significant harm suffered by asylum seekers returned to the US”—immediate and automatic imprisonment.

As the Court noted, the evidence indicates that those asylum seekers sent back to the US by Canadian officials are placed in detention centres as a penalty, and without regard for their particular circumstances, moral blameworthiness, or their actions.

During detention, individuals live under appalling conditions for an average of 31 days, usually with the inability to communicate with family members. They often face barriers in gaining access to medical attention and legal advice. As a result, they are unable to assert their asylum claims and are forced to return to persecution.

The Court concluded that detention in the US and the ensuing hardship and risks amount to a violation of section 7 of the Canadian Charter of Rights and Freedoms on liberty and security of the person.

This historic decision challenges the very premise of the STCA in two ways. First, it exposes the US as an “unsafe” country for asylum seekers who are ill-treated and denied access to a fair refugee process. Second, the Federal Court has rejected the government’s contention that the STCA ensures “responsibility sharing” between Canada and the US.

The government argues that without such an agreement, the rising volume of refugee claimants would jeopardize the overall sustainability of the refugee system. However, according to the Court, imprisonment and threats to asylum seekers’ security cannot be justified for the sake of administrative efficiency.

Finally, the Court stressed that Canada is not a “passive participant” in the human rights’ violations of asylum seekers. On the contrary, Canada is directly responsible for the fate of these individuals, as the actions of Canadian officials in returning ineligible STCA claimants to US authorities facilitate a process that results in detention and various rights abuses.

The Parliament now has six months to respond and take action. Until then, the current Agreement remains in effect. This means that for another six months, Canada can continue handing over asylum seekers to the US officials for arbitrary detention and, sometimes, immediate deportation to confront persecution or other life-threatening situation. As the Federal Court put it, Canada cannot turn a blind eye to the consequences of its actions. It should rescind the STCA immediately, not six months from now.

Idil Atak is an associate professor in the Department of Criminology and in the Law School of Ryerson University, Toronto. Her research interests include irregular migration, refugee protection, and international human rights law. Atak is the Editor-In-Chief of the International Journal of Migration and Border Studies (IJMBS), a member of the International Association for the Study of Forced Migration’s (IASFM) Executive Committee, and the past president of the Canadian Association for Refugee and Forced Migration Studies (CARFMS).

Zainab Abu Alrob is a Ph.D. student in Policy Studies at the Department of Politics and Administration. Alrob holds an MA in Global Governance from the Balsillie School of International Affairs, Waterloo. Her research interests include border policy, refugee protection, and access to human rights. She is currently involved in a research project examining the impact of border security measures on the rights of irregular migrants. She also conducts research on refugee settlement, resilience, and integration in Canada.

Jona (Yona) Zyfi is a Ph.D. student at the Centre for Criminology & Sociolegal Studies at the University of Toronto and a Junior Fellow at Massey College. Born in Albania, raised in Australia and now living in Canada, Jona’s research is motivated by her lived experiences with immigration and refugee systems and processes: “My research explores the role and impact of technology in migration and refugee regimes with a particular focus on automated decision making in refugee status determinations and the right to international protection. I am also interested in the governance of refugee protection in light of technological developments in this space. 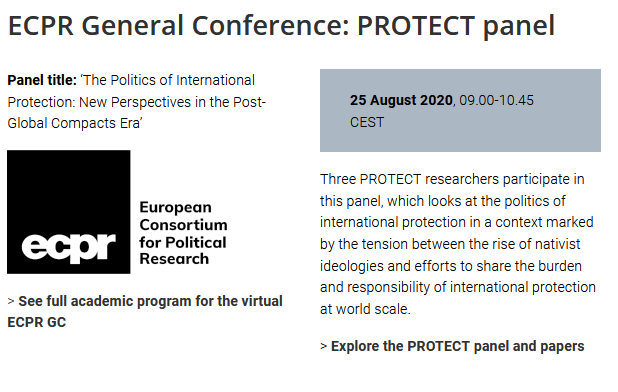